Free shipping on all orders!

Get in touch with us

Please note currently there is a delay (1-2 weeks) in shipping LoafNest liners.

LoafNest liners are made with glass fibers reinforced High Temperature Resistant Silicone. Perforations allow better heat transfer, allow moisture to escape at the bottom, giving a crunchy crust and give that professional baked texture on the bottom.

LoafNest Silicone Liner is non-stick and easy peel thanks to silicone material and its flexibility.

LoafNest silicone liners are Made in France, by Demarle, who are known for their pioneering Silpat baking mats.

LoafNest Liner is designed to be used as a part of LoafNest Incredibly Easy Artisan Bread Kit.

The LoafNest makes a fine loaf of artisan bread with a minimum of fuss. The price of a replacement silicon liner is outrageous. I would have assigned 4-1/2 stars but for this.

T
Tom O.
What customer service should be everywhere

We purchased three LoafNests for Christmas to give two as presents, and we kept one. As sometimes happens, one of the packages was incomplete and missing the liner so I contacted customer service to get a replacement. The response was immediate and a new liner order was put in. As luck would have it, our shipment was caught in a snow storm and ultimately lost by the carrier. I had been communicating with WEkigai throughout and they were always professional and attentive. Once we confirmed the lost shipment, a second replacement was sent by WEkigai. We now have our LoafNest complete and appreciate the effort WEkigai put into solving our issue. Great job WEkigai!

I have never been able to make a good loaf of bread but I just did it with a loaf nest and it was super easy and the bread is amazing! Love it! 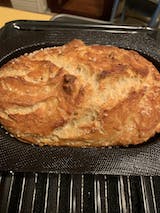 What people say about LoafNest

Loafnest is a game changer for experienced and new baker.[Source]

Makes Good Bread Easy.
I have had the [LoafNest] for five days and my third loaf is proofing. It is not just the pan and liner; it i s the process that makes the bread easy and successful. [Source]

Wow! This is amazing! It is simple and takes very little time to bake artisanal bread. [Source]

You buy directly from the creators with no middlemen

Free standard shipping is included on all orders

We make you feel you are our only customer!